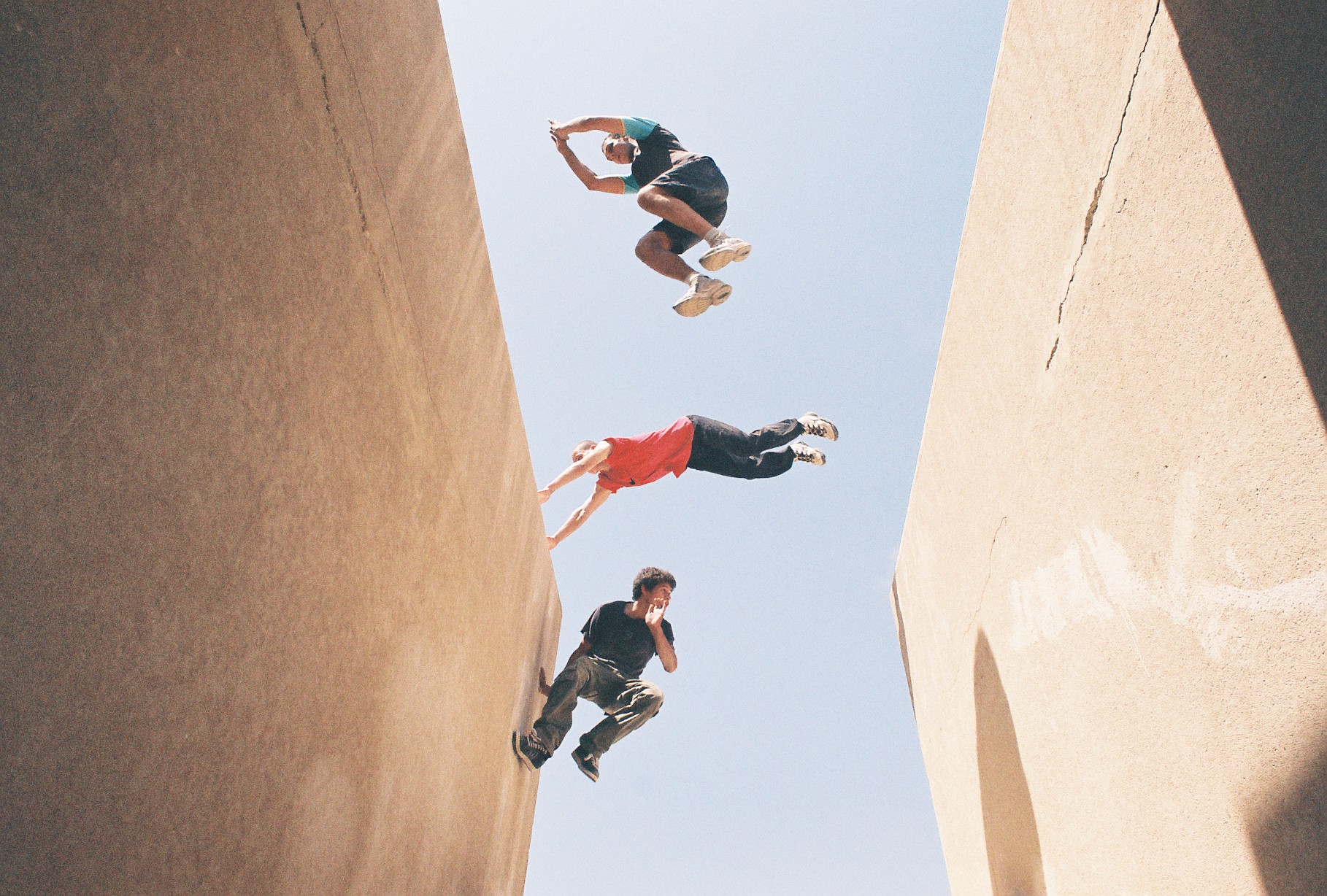 The City as a Playground

In Cairo, tension is thick, traffic is mad and infrastructure is asphyxiating. But a group of young men pushes the limits of this megapolis and themselves. This article is about their scars, broken bones, arrests, and, finally, their liberation.

A back flip from a pommel horse, over another with a chair on top, he lands softly on a third, the pyramid of stuff behind him intact. “It is about balance, you need to learn how to balance after you land, outdoors it may cost you your life,” Mohamed Sobhey explains to the circle of beginners. Captain Nasser – the main coach – is not at the gym today, he is honeymooning in Saudi Arabia. Ali Amen (aka Eagle) has a scan of his fractured ankle on his phone, you can see in white the iron plate and 11 bolts in bone (from an unfortunate backflip outdoors). He often comes to watch and chill with his friends. Ali has 6 months of physio ahead. Maybe he never will do Parkour again. “If you get scared, you will not be able to do it!” Amr Samy (aka the Flash) addresses another group of beginners as they leap over a fence, practicing Kong jumps. “It’s about breaking fear!” he says, “you do a stunt the first time and you break 50% of the fear, the second time you do it and 100% is broken.” It is a busy day at the gym.

From the second half of the twentieth-century Egypt experienced massive urban growth. The skyline of its Capital – Cairo – changed along with life in it. Within this changing public space, Parkour is a challenge these boys throw at the city planners and their vision of the use of the space. And a challenge they throw at the social perspective of the body.

A need to change

“People want to change, they want to do a new thing, they watch those Parkour videos and movies and they get inspired. It is not necessary they want to Westernize – it is a way of expression,” says Nadia Ilahi, an anthropologist at the American University of Cairo.  “People creating public spaces, but here it is not about demonstration but more of an expression,” she said.

“It’s a way of thinking rather than just plain sport,” asserts Captain Nasser, 32, “I am trying to pass on Parkour’s philosophy to these boys before anything else.” Captain Nasser Eid is a traceur since 2005. Parkour, a French-born discipline, has spread around the globe. Mike Christie from the UK, known for his documentary Jump London, explains why Parkour has a global appeal, “it taps into something core within us as humans, regardless of race, origin or culture.” Chase Armitage, a young British traceur known for his virtuosi stunts, says, “I have seen it change so many people’s lives for the better, they have something to focus on and give their effort into. Most people causing trouble just don’t have something to dedicate their time to. Parkour is a very natural thing to pick up and does not cost to take part.“

Three years ago, Egyptian teenage boys watched Luc Besson’s District B-13 starring David Belle and wondered, what is it? From websites like YouTube they learned about Parkour, found friends, and got together. Nowadays Parkour Egypt, the first Parkour team, has over 40 regular devotees and is growing. There are no girls on the team. The traceurs, a lot of them religiously observant, are not keen on having both genders training together – which doesn’t mean that women can’t do Parkour.

A lot of the boys keep practicing Parkour despite their parents’ worries and disapproval. But they say that now, after some time, parents start to appreciate what their sons are doing instead of wasting their time in coffee shops or worse on nicotine and drugs. Besides being a country with the highest rate of tobacco consumption in the Arab world, around 6 million people in Egypt are addicted to drugs, the majority aged between 15 and 25.

Anthropologists view Parkour as a “non–normal occurrence”. In the context of Egyptian streets, you do not fully own your body. “Everything is an issue of security here, issue of the state,” says Nadia Ilahi, “how to break your fear when you are facing the adversary, because they also want to control you, they also want to own your body.” Security was always a concern in any kind of public activity. Parkour’s idea – and the charm of it – is to be free and fearless, which becomes a challenge in a police state as it can be taken for subversive action.

”Mamno’a” (arabic. forbidden), a common word one is confronted by security if you want to use a public space near an Embassy or subway or any other space that happens to have a lonely security man on duty. The Pyramids and the Chinese Embassy are the traceurs’ dreams. Mamno’a photography and God forbid jumping. And Captain Nasser has an alarming Islamist-style beard which gives the impression of a jumping extremist (which he is not). Although local media enthusiastically picked up Parkour, not everybody emphasized on the religious side of the team.

When tracuer Tamer Aladin says, “Parkour gives a feeling of freedom from restriction, freedom from physical bounds and fitness limitations. Freedom to express oneself in a physical form!” This freedom a traceur learns outdoors, where rules are different from inside the gym, with mattresses and no authority. Often they retreat to isolated Cairo suburbs or to abandoned shopping malls.

Any suspicious gathering can spark a security alarm. The Egyptian government extended the Emergency Law in 2008. The law prohibits public gatherings, enables the police to detain citizens without charge, and provides for trial before state security courts. And when the young traceurs cautiously explain to the police officer what are they doing, running away is, even if they can run away from the police, never crossing their minds. Techniques to deal with police are studied, Tarek Omar, 19, explains, “you should deal with them as with usual curious people and answer their questions with a smile from the heart.” Traceurs usually work their way out, no one has been detained so far, but sometimes the police take their ID details, just in case.

Winning the crowd makes sense in Egyptian streets. The crowd is always curious about anything unusual. Lines between the private and the public often blend outdoors. “It’s voyeuristic in a way,” says Ilahi about the Egyptian public. People think twice before bringing up their unusual pastimes from behind walls. It is a show and Parkour has found its way onto the stage. Yet it depends whether applause or rotten tomatoes will follow.

When the team had their first demo at the school where Captain Nasser works, parents and their teenage kids were mesmerized by the traceurs flying over picnic tables. The boys were excited; they even hoped for a potential sponsor to invite them under his wing. However, on the streets, Parkour is still an odd show. Together the young traceurs express their concern about the public’s attitude, “In most places, people don’t accept the idea of Parkour, they see danger, even call security sometimes, it’s unknown to them,” says Captain Nasser. The boys hope despite all the odds to take Parkour to the professional level, to the entertainment industry, and to establish the first Parkour organization in Egypt. It’s hard when you come from a background of ordinary families in a country running on “connections” and divided into distinct social classes. But that is what Parkour teaches you, overcoming life’s obstacles and fears.