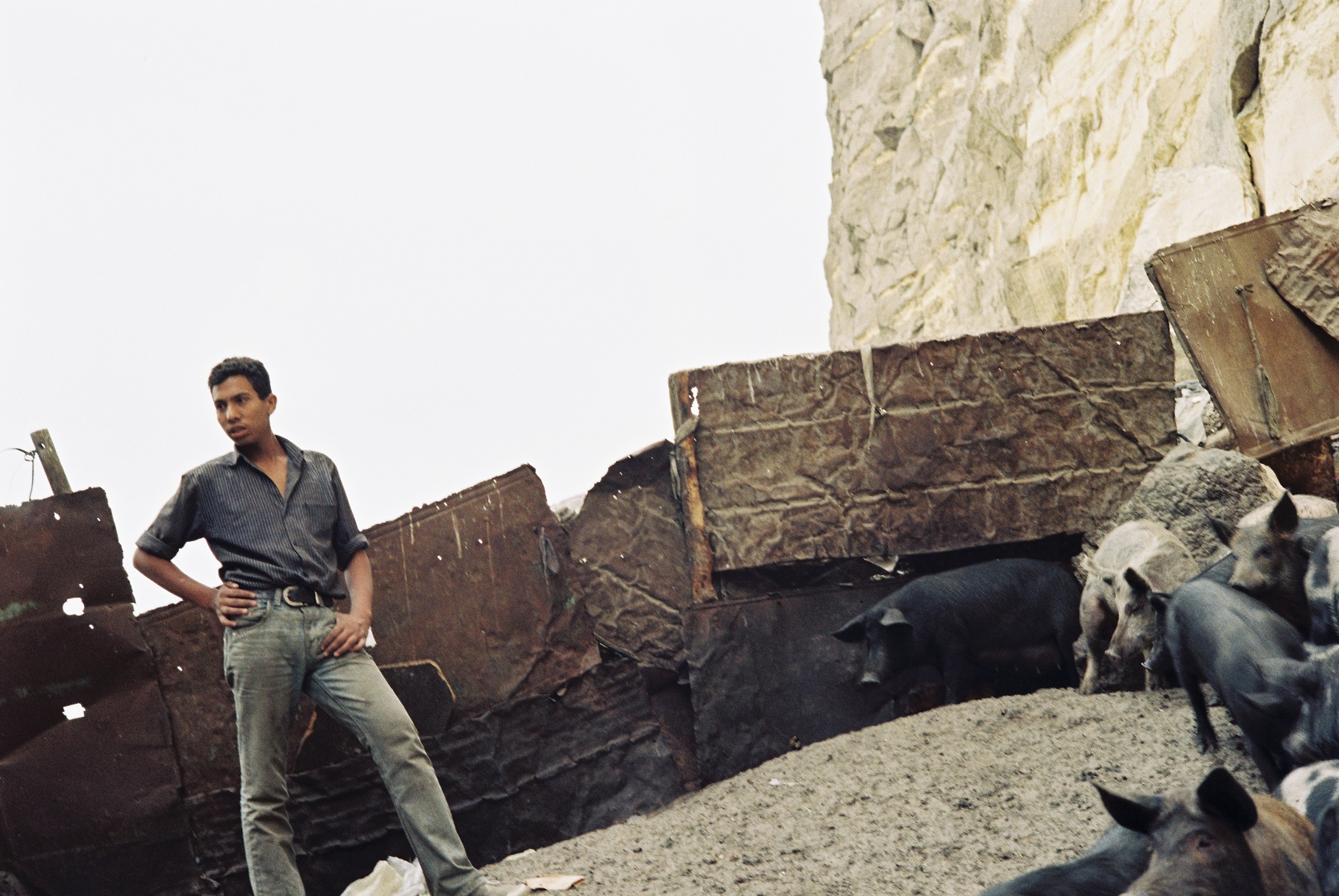 Swine Flu Could Spell the End of Garbage City

A reportage from the “epicenter” of a pandemic – Cairo’s notorious garbage district.

“It has been decided to immediately start slaughtering all the pigs in Egypt using the full capacity of the country’s slaughterhouses,” the Egyptian Health Minister Hatem El-Gabaly announced to reporters after a Cabinet meeting with President Hosni Mubarak on the 29th of April. It is a governmental health measure in response to the Swine Flu pandemic that drew criticism from the World Health Organization (WHO). The decision will impact the half-century-old livelihood of thousands of pig farmers across Egypt.

“We do not know what we will do now,” says Yacoub, sitting at the entrance of his house in Manshiyat Nasser district near the Moqattam mountains, eastern Cairo. Yacoub is one of the 20,000 Zabaleen (Arabic for “garbage people”) who settled at the foot of the Muqattam in the 1970s establishing today’s infamous “garbage city”. There are around 70,000 Zabaleen in Cairo alone and the majority are Coptic Christians who originally migrated to the capital 60 years ago from northern Egypt and became unpaid garbage collectors. Landless farmers and pig rearers live off Cairo’s waste-recycling and pig breeding. Despite the poor conditions and illiteracy, the traditional waste collectors of Cairo (Zabaleen) have created what is one of the most efficient resource-recovery and waste-recycling systems.

Yacoub’s family still has some of their pigs, but his neighbor just had his 15 pigs confiscated. As the truck with unwashed blood stains left, I spoke to the wife of Yacoub’s neighbor. She was unwilling to speak, explaining in despair that “words will not stop them [the authorities].” Some expressed their anger at the government’s actions, some refrained from comment, and some slaughtered their remaining pigs in the backyard, leaving only small piglets for the authorities to collect.

The recent pig-commotion reminds people of 2006 when the Arab world’s most populous nation battled bird flu and the government killed 25 million birds within weeks. Then many accused the government of not taking precautions earlier, when bird flu first appeared in Asia in 2003. Eventually, when mass bird culls took place, the disease had already killed more than two dozen people. Looking back at recent years, the Egyptian government experienced criticism for its poor safety conditions; a 2005 ferry disaster killing 1000 passengers, a rockslide in Moqattam that killed at least 100, a series of fires that erupted in a couple of national theaters, and one that burned down the upper house of parliament. The government sees its plan of culling 300.000 pigs as a judicious precaution to calm fears of the imminent pandemic.

The waste collectors expressed their concerns that the slaughter is just the beginning, and the government is plotting to remove all the garbage and relocate the Zabaleen. The waste collectors’ lands have been inherited from generation to generation so they are without legal ownership documents. “The government will bring foreign companies to deal with the garbage and offer us 400LE-a-month jobs, it is not enough when an average family here consists of 10 members,” said another waste collector who preferred to stay anonymous. Besides selling paper, plastic and homemade handicrafts from recycled garbage, pigs are the main source of income for the Zabaleen. Pigs consume organic garbage which constitutes 60% of the total incoming waste. Every 6 months, the waste collectors sell adult pigs, 5 to 15 pigs generally, to a trader for 7LE/kilogram ($1.25/kilogram). The trader then takes pigs to the slaughterhouses where a kilogram is sold for 30-35LE ($5 – 6.25). The waste collectors can earn around 450LE ($80) per pig.

Now the government is offering 250LE ($45) as compensation for an adult sow, 100LE ($18) for a male pig and 50LE ($9) for a piglet. On the 6th of May, the Egyptian newspaper Masr El Youm reported that the Minister of Agriculture Amin Abaza decided to keep 1,000 sows and breed them in specialized governmental sites near 15th of May City (an industrial area outside Cairo), away from the slums, to preserve the origins of Egyptian stock, while the sows’ owners will be compensated financially. It is uncertain whether the waste collectors will have an opportunity to begin pig breeding again.

“Because the majority of the population is Muslim, it is OK to slaughter all pigs and the action will go not only unnoticed but will even be welcomed,” said a Coptic Christian waste collector who also preferred to stay anonymous. The majority of pig farmers, and those who eat pork, are Coptic Christians who constitute 10% of Egypt’s 80 million population. Pigs are seen as unclean animals by the Muslim majority. Many waste collectors accuse the government’s pig slaughter of undermining the Christian minority and aggravating tensions between Muslims and Christians. However, besides the violent clash between the Zabaleen and the authorities on the first day of slaughter, no violence between Muslims and Christians was reported.

Christian farmers referred to the head of the Coptic Church, Pope Shanouda the Third, to interfere and condemn the authorities’ actions. But Pope Shanouda among other Coptic leaders made it clear that the Coptic Church has nothing to do with the government’s decision and it condoned the slaughtering. The opposition Muslim Brotherhood was, on the other hand, critical of mass pig culling on the grounds that it was not properly thought out.

The Swine Flu virus was renamed Influenza A (H1N1) by the WHO following pig culling in Egypt – the only country to do so– causing some other countries to ban pork products. H1N1 flu has infected 4,379 people in 29 countries, the World Health Organization (WHO) announced on the 10th of May. The United States has the highest rate of infections, with Mexico second. H1N1 flu has also reached Canada, Europe, Brazil, El Salvador, Argentina, Columbia, Guatemala, New Zealand, Australia, Hong Kong, Japan, South Korea, and Israel. Egypt has not reported any H1N1 flu cases – so far.