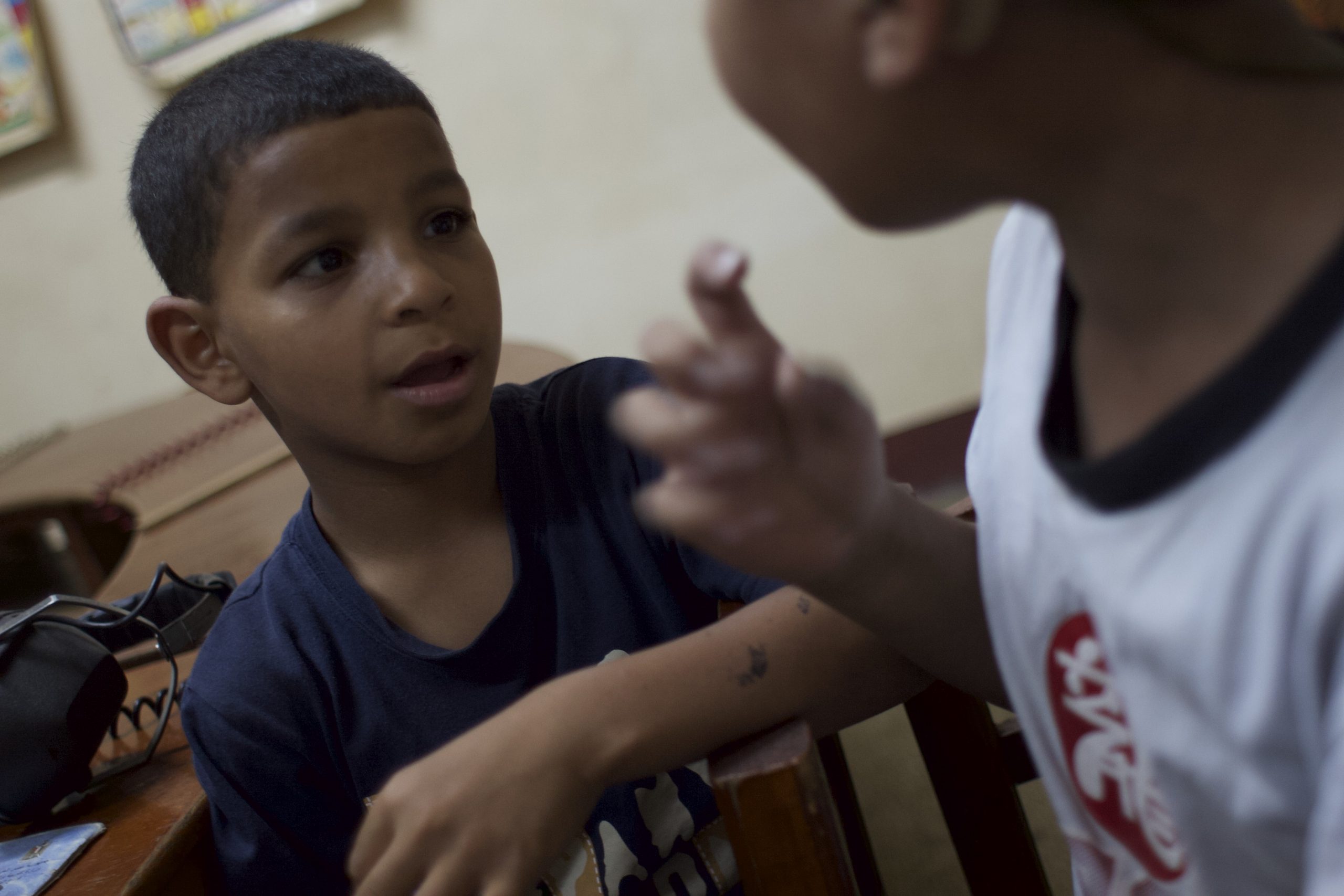 Conversations with the Deaf

It is hard to live in Egypt with a disability, with unequipped infrastructure and deformed stereotypes – and no state support. The article is about being unheard.

July the second, 9 pm, the Egyptian Cup Final. The streets are packed with fans overflowing from Cairo’s innumerable coffeeshops. One place remains quiet. Five stories up, 20 people gather around a television. Founded in the ’60s, it’s the only deaf club in Egypt. Every goal is greeted with moans, jumps and rapid sign language. When the game is over, and the cheering from downstairs fades, the chairs in the room switch positions to face each other. The television is ignored, and the football fans’ fingers and hands restlessly sign to each other, discussing the match. Sami Fouad, a club supervisor, signs, “It’s one of the few places where we all can sit together, play dominos, watch TV, and talk.”

The deaf community constitutes 4% of the two million Egyptians with disabilities, a number that puts Egypt high on the WHO’s list of countries with the highest disability rates.

In 1971 Ramdan Mohamed Ibrahim turned 15. Like others, he joined long queues for inoculations. The nationwide campaign against bilharzia, with unsterilized needles, would be the main cause of the current prevalence of Hepatitis C in the country, according to USAID findings. “They just boiled the needle and stuck it in the next person, they did not care whether the needle was sterilized or not, boiling and shooting,” Ramadan remembers the mess.

While Ramadan was not infected by a dirty needle, his life irrevocably changed after the vaccine. “I woke up after a couple of hours the same day and couldn’t hear an iota,” Ramadan recalls. “The overdose caused an inflammation of his hearing nerves, resulting in a rapid hearing loss,” as Dr. Hatem Anwar, a neurologist and lecturer at Cairo University’s faculty of medicine, comments.  Losing his hearing at a late age, Ramadan, who is now a Deaf Club secretary, has been able to maintain his speech and can easily lip-read. But 36 years later, he is still fuming.

Ramadan was forced to withdraw from regular classes and enroll in a school for students with special needs. “I thought, ‘special’ education should be interesting. I was surprised to find that the material was close to the primary level. I complained to the teacher, but she said, ‘This is what you have to take. Sit and write.’ So, I did.”

70 percent of deaf women and 60 percent of deaf men are illiterate in Egypt. In contrast, the illiteracy rate among the hearing population is 41 percent in women and 17 percent in men. There are 600,000 disabled children in need of special education and only 15% attend regular schools. Deaf children who enroll in a regular school have to read teachers’ lips or find a compassionate classmate. The others have a choice between special education, where the curriculum is two years behind or life outside the system.

“Deaf people hear, but on a different wavelength,” Evelyn Farah, a sociologist with 25 years of experience dealing with disabled people, explained. Evelyn demonstrated a SUVAG amplifier. I put my hand on a headphone, the bass tickled my palm. When Evelyn speaks to the kids through the microphone, they “hear” the vibrations as they pass through the delicate skin around their small ears. It is important that children are sent to a phonetic center at age two, after 8 it is too late. If those kids learn how to speak and recognize sounds, their chances to acquire a proper education grow. In Evelyn’s opinion, the problem is compounded by a lack of awareness and acceptance on the part of parents. This is particularly common in rural areas where disabled children are sometimes hidden by families who fear that a deaf family member minimizes siblings’ chances of marriage.

Kentucky Fried Chicken, West Cairo. Hoda, the cashier, fanned an imaginary fire in her mouth, asking if I wanted my sandwich “spicy”.  She is lively, deaf and looks younger than her thirty years. “In my past job I was feeling like an outsider and disadvantaged, because I was the only deaf person, but here we are all deaf.” 13 years ago, Hoda Abdel Samia left her sewing job in a textile shop. Hoda along with other 14 deaf people, selected by the Egyptian Society for the Rehabilitation of the Deaf, were to form the first ever Middle East KFC restaurant entirely staffed by the deaf.

“We have health insurance, bonuses, a comfortable place to work, and the money is enough for now”, Hoda adds, “This place is a special place that people should know about”. Nabil, Hoda’s husband, signs, “Before, the only thing I had to deal with was a bloodless steel mechanism, but here I deal with people.” Previously he worked in a textile factory. Now he is the restaurant’s supervisor.

Ahmed Mounir Shouman, the director of the Egyptian Society for the Rehabilitation of the Deaf told the other side of the story, “In exchange for hiring deaf employees, Americana Group, the owners of KFC in Egypt, had promised to donate around half a million pounds [US$ 270,000] to the center, but it never happened.” Instead, he claims, all they do is provide 250 KFC meals to the association every Ramadan as a symbolic donation.

Carpentry, leatherwork, carpet making, metalwork, and the textile industries are the most common jobs for the hearing-impaired. Others may fall victim to Egypt’s high unemployment rate. “In 2000, the rehabilitation office approved 177 rehabilitation certificates, but only ten were employed”, says Ahmed Shouman. Marawan Mohamed, 26, graduated with a diploma in wood engineering, but the only job he was offered, being deaf, was as a servant / tea-maker. As he signed, he occasionally threw a harsh smack into his signing, expressing his frustration.

The Labor Law of 1982 mandated recognition for disabled people in general, and the deaf in particular. It stated “that 5 percent of workers in factories and companies employing fifty workers or more should be of the trained disabled.” Yet discrimination prevails. It needs the efforts of two worlds, deaf and hearing, to lift the barrier.