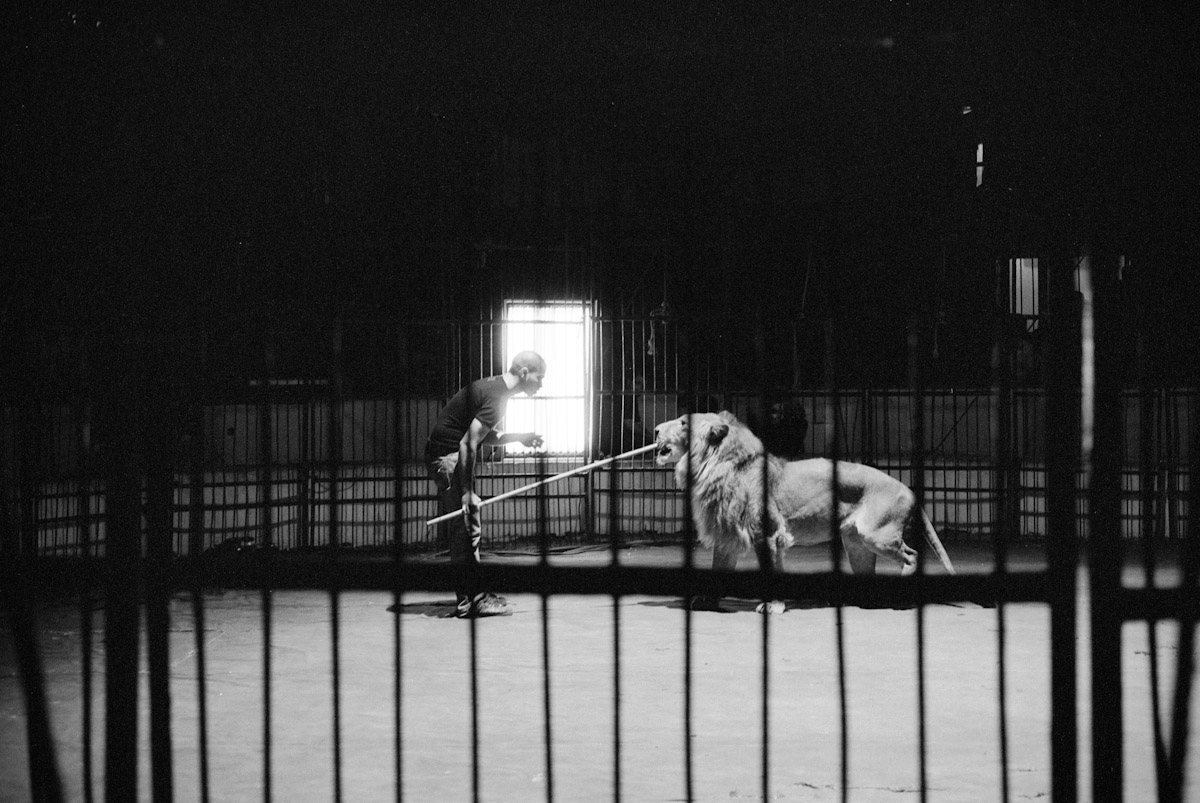 After President Mubarak was gone, and the mass euphoria afterwards, Egypt slipped loudly and proudly into chaos. One thing was certain, the drumrolls at the nighttime shows. It is a reportage about the military state through its most magical department, the state circus.

Backstage two chain-smoking clowns in full make-up thrashed out politics in a gloomy changing room. “Listen, the minister will get away with it, the judge has no proof!” argued one clown. ‘No no, people found secret files at state security proving his guilt,” said the other. Koko and Timon talked about former Interior Minister Habib Adly’s corruption trial and his alleged ordering of police firing on protesters. “Before, we knew nothing about politics, now the only thing we talk is politics,” said Walid Yassin, Timon, from under a veil of smoke. Outside, the revolution rolled on.

“Anyone can be a clown, but not like someone who loves it,” said Walid, 30, the son of a circus cyclist and clown, while applying white cream around his mouth. It was another kid’s birthday. The little audience demanded his jokes and miracles. Walid raised his palms to his face and recited the Fatha (opening of the Quran). “Timon, Timon!” He juggled rings and poured water from kids’ noses. After the show, Walid packed up his props and shuffled away to the state circus where his brothers and friends waited for him – where, he said, they were born.

Fifty years ago following arms agreements with the Soviet Bloc, Gamal Abdel Nasser established the state circus – the first in the Arab world. Performers were trained by Russian and East German experts, traveled abroad and received medals. The Egyptian circus traveled as far as North Korea and Canada, until the regime of Hosni Mubarak, in power since the 1980s, lost interest and cut funding for international tours. The regime ended with the 2011 revolution.

The country has changed since the circus began in1966; it went from nationalisation to privatisation, and from a single-party state to a struggling democracy. Its circus has changed too. It was burnt down in 1975, it survived fluctuating recessions, and was recently revamped. Last year’s income hit a record with the international summer circus festival. Annually it makes around USD 1 million. While the state circus is the biggest earner in the Ministry of Culture’s performance arts division, its soul has become a forgotten governmental department.

Before the curfew, somewhere between the daily protests, sirens and sporadic gunfire, the show starts. Ashraf, a magician, inserts knives into a box containing an ample woman. Karim in tights and fishnets swings and scatters glitter from 5-meters up. A woman in her 70s with feathers in her hair wraps herself in reptiles and sways with the music. Twins perform with poodles and pigeons. Acrobats vault over each other and wire walkers are dressed in the colors of the Egyptian flag. Behind bars Medhat Kouta, 53, in a leopard-skin shirt dances with a big lion, then turns to the audience, smiling and gyrating to the Latin beat. They are superstars in the ring. After the show, they fade away. “The whole world is a circus, we are a small circus within it,” the circus director once exclaimed, laughing.

It’s a hierarchy inside the circus; on top are the lion tamers, between are the acrobats, and on the bottom are the clowns. It’s like a gang convention, they explain. Family links are crucial. Mostafa Ramah, 60, a tightrope walker, watched his two children leave the circus, but he stayed. His late brother Hamed, the only family he had at the circus, competed with him. Hamed was decorated by president Sadat himself and balanced on top of the Cairo tower 500 feet above the ground. Mostafa was a younger brother, “I joined the circus because of my brother, and I will stay from stubbornness.” He extended his contract despite the mandatory retirement age. Ramah joined the state circus at 12 and learned everything from training foxes to wire walking on his own. He earns USD100 per month and nobody messes with him because he knows circus secrets. He traveled to 21 countries, but not anymore. Ramah said that what is happening in the circus now is ”settling scores” between performers.

Medhat Kouta has a small hole in his leg where muscles used to be, “that lion saved my life, I would have died if he didn’t interfere”. At 16, he was attacked by lions during practice, Tomy, his mother’s birthday gift, fought the lions away until Medhat’s mother took him out of the ring. Before the revolution, Medhat traveled to Dubai to perform with his daughter, Anusa. His son, Hamada, 25, left Egypt a year ago and never wants to return. He felt neither the circus nor the audience understood his ambitious shows. He first performed with his father at 2, lions became his favorite game. Hamada often talks to his animals. He is performing with the Russian State Circus, is married to a Russian acrobat, earns USD 1000 per gig, and feels contented. While in the Egyptian state circus, he substituted for his father but never had a contract. He worked with private circuses for USD180 per gig. “The circus didn’t change since the seventies and never will, even after the revolution,” he said.

Outside the state circus, a black and white illuminated poster shows young Medhat putting his head in a lion’s mouth and Hamada posing in the foreground of a shrine of his lions, like the ghosts of a venerable legacy.

When Egypt was a monarchy in the 1930s, Ali El Helow and his two sons Mohamed and Hassan worked in the port and watched Italian circuses coming and leaving Egypt. The El Helows were mesmerized by circus life. They started working with foreign circuses and over the years bought animals from them and started their own circus business. However, Mohamed and Hassan split up and since then a lifelong rivalry took root. Each of the brothers had his own traveling circus. They were the two pioneers of big cat taming in the region.

Hassan El Helow had a daughter, Mahasen El Helow, who became the first female lion tamer in the Middle East. She joined the state circus in the 60s, taking little Medhat to perform with her. Like her father, Mahasen taught Medhat lion taming. And they performed together – mother and son. Mahasen El Helow took a husband from the Kouta family, fame was split between the Helow and Kouta families. Generation after generation inherited the animals, the craft, and the rivalry.

Performance is about control. One evening a show went wrong. Music stopped. The audience panicked. “God help her,” a woman groaned. Luba El Helow knew she could die right there in the ring. One lion tried to bite her arm. “Stay! Stay!” despite the fear she exhorted the rebellious animals. Never turn your back – it cost her grandfather’s life. The animals, baring their fangs, were ready to pounce again. Her father, Mohamed El Helow, rushed shouting into the ring to save his daughter. Earlier the new minister of culture Dr. Emad Abou Ghazi said the state circus is not a priority right now. A lion clawed Mohamed’s hand, the tamer yelled at the animals to regain control. The animals eventually obeyed and left the ring. The audience applauded with relief. Luba told me later they have no health insurance.

In 1967 Egypt lost a war with Israel, sapping the country’s resources and its people’s morale. Three years later a lion attacked his master and lacerated his kidney when he turned to greet the audience in the state circus. Mohamed El Helow, Luba’s grandfather, died in hospital. Sultan the lion died later. Novelist Yusuf Idris saw the accident. Inspired, he wrote a poem where the lion’s attack was an allegory for the defeated and weakened state of Egypt. The tragedy added to the Helow clan’s fame. In 2004, another lion was chosen as a symbol of Egypt. Tala’at Sadat, the late president’s nephew, was campaigning under a lion symbol and asked Hamada for a lion to travel with him. Hamada was arrested by the secret police for interfering in party politics. He was later released. It didn’t add to the Kouta’s fame.

The ministry was reshuffled three times since the revolution. Now the new minister has his hands full restructuring the ministry, focusing on literature, censorship, art and film. Dr. Abou Ghazi met with department heads and intellectuals, but the circus was notably absent. The circus director and three magicians met to talk about addressing Minister Abou Ghazi. “We need to act immediately or we will be left behind!” said the director. “Either the minister meets us or we protest,” said one of the magicians. Muhamed Abu Leila, the director, is not fond of ultimatums, but he shares the concern that nothing could improve over the old regime. “We will send three magicians with a petition his way, the minister will have to come round,” said the other magician jokingly, and everyone laughed.

Now Abu Leila is the circus director, but in 1973 he was a teenage gymnast high on a circus rush. “This feeling when you’re on stage and 1,300 people are watching you doing something nobody else can do, it consumes you,” said Abu Leila, “you spend 4 years learning a trick that will last 8 minutes in the show, it is unique.” He was selected for an exchange program between the USSR and Egypt in 1975 to study circus art, and specialized in aerial acrobatics. Abu Leila doesn’t perform anymore, administrative work takes most of his time, but he never forgot his acrobat’s balance. “The circus was stronger during Nasser’s regime, it was one of the five best circuses worldwide, now people don’t see that circus is art!” The performers feel undervalued by the Ministry. Abu Leila thinks independence from the state and bringing in a sponsor could improve things.

During the economic stagnation of the last 20 years, the young generation of performers has looked beyond the state to supplement their meager salaries. TV adverts, weddings, kids’ birthdays, day jobs in supermarkets, stunts in movies, whatever it takes. The salary in the state circus is around USD 90 or USD 180 per month if you are a lion tamer, while in the private sector it is USD 1000 or more per gig. In 2010, the state circus joined the strikes opposing the government’s tough 2004 economic reforms and spiraling prices. Walid Yassin was there. During the 2011 revolution, the performers again joined the mass strikes that reached over 2 million people. Eventually, their salaries were raised by 30%.

Walid says that clowning is a mirror of reality. On the stage, Timon can ride a bicycle backward. But when the act is over and stained handkerchiefs are all that is left of Timon, there is Walid, who makes his own clown clothes, travels to upscale compounds for birthdays and weddings, and spends hundreds importing equipment. Two opposite lives, one on the stage, another behind the curtains. “I thought of leaving the state circus, I haven’t made more than USD1800 my whole career. But it’s like a virus, I can’t leave the circus, I have my friends here, I wake up and go to the circus, I lived here more than I lived at home, I love it,” said the clown.